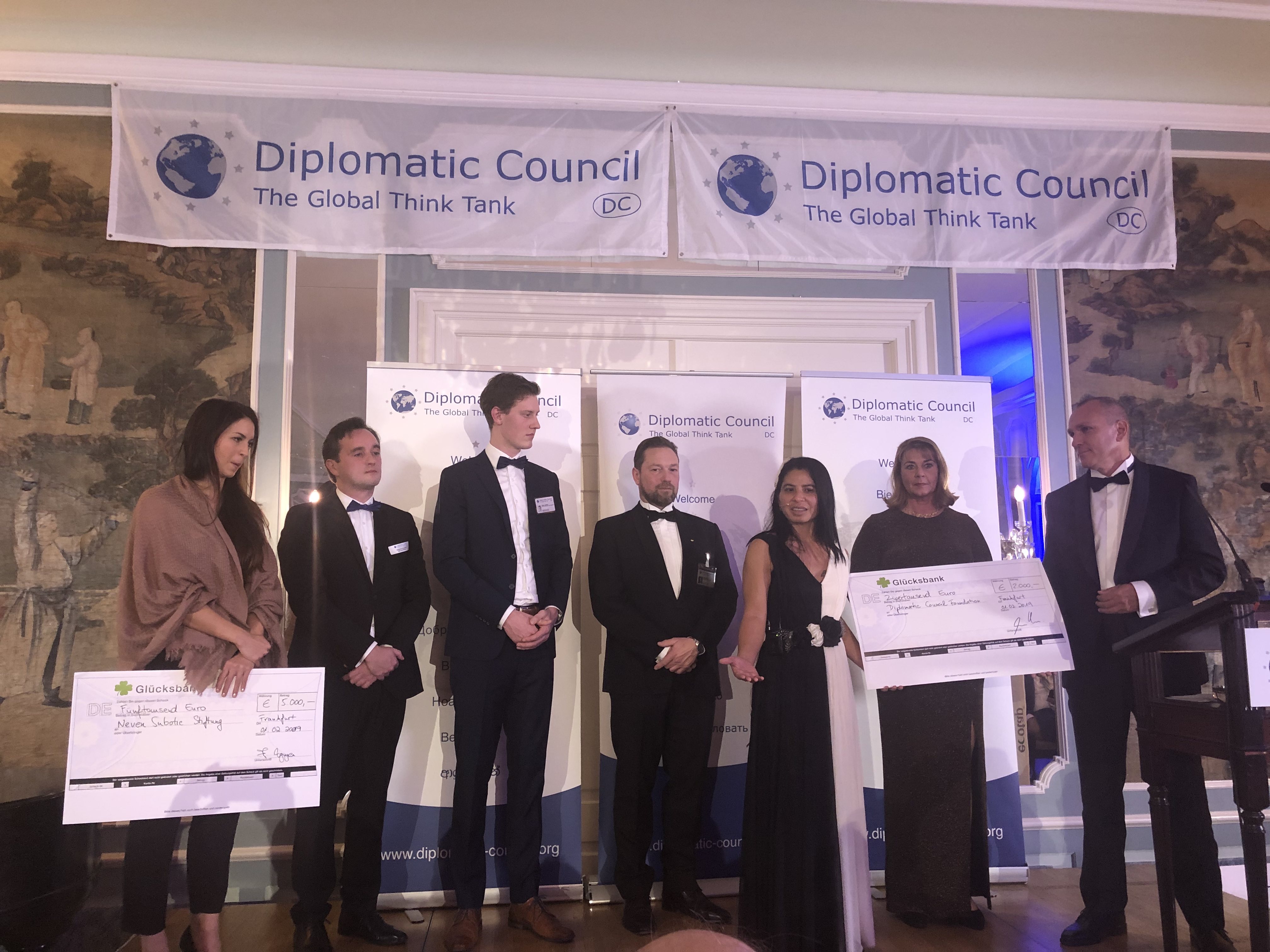 Right after the check-in, members and guests seized the opportunity to be professionally photographed with dignitaries of the Diplomatic Council. Printouts of the pictures could be taken home at the end of the event. For those who prefer digital pictures, the Diplomatic Council picture gallery is now available at: http://photos.diplomatic-council.org. The gallery also includes pictures from former galas and summer festivals.

The grand opening of the festive evening was performed by the divine coloratura soprano Karine Minasyan and the highly-talented pianist Albert Frantz. Both enchanted the audience and transported them into another world.

German ambassador, Dr. Heinrich Kreft, member of the Diplomatic Council Board of Presidents, delivered a passionate yet thoughtful speech encouraging more multilateralism and less “firsts” in light of the increasing political economic and social uncertainties around the world.

The Ambassador of the Republic of Croatia in the Federal Republic of Germany, Dr. Gordan Grlić Radman, is the recipient of the Global Public Diplomacy Award presented by Diplomat Magazine and Diplomatic Council. Dr. Mayelinne de Lara, Diplomat Magazine’s publisher, ceremoniously handed over the prize sculpture. At the same time, the ambassador was named honorary member of the Diplomatic Council.

Celebrating is more fun with a clean conscience: at this year’s gala, members of the Diplomatic Council have demonstrated their social engagement.

The Diplomatic Council Students aim to collect donations for the Neven Subotić Foundation to build a drinking well to help children in the poorest regions in the world (Ethiopia) to gain access to clean water and sanitation and to improve the hygiene situation for them with the result that more children can attend school again since they are no longer kept away from school due to sickness. Diplomatic Council Business Ambassador Dr. Thomas Durchlaub has donated € 5.000,-- financing half of the water well already.

Eric Adler, member from Gran Canaria, has donated a substantial amount to finance the study of an orphan girl in Sri Lanka. In addition, he is offering 600 coaching packages to Diplomatic Council members with the promise to donate 100% of all fees paid for these 600 packages to the Diplomatic Council Educational sponsorship program. Depending on the purchase power of our members, this donation volume amounts to more € 200.000,--.

NL Mobilty, long-term member from the Netherlands, has kicked off the Diplomatic Council Social Good Initaitve at the Gala. For all electric stations and accessories sold, NL mobility will donate a significant portion to the educational sponsorship program.

Networking at the highest level

The atmosphere at the gala was harmonious and relaxed. New relationships were established and exiting friendships were deepend while members and guests enjoyed the festive buffet. Once again, the Diplomatic Council gala has become a hub for top-class networking opportunities. For this purpose, members and guests have travelled from all over Germany and the European countries such as Austria, Asia, Africa an USA. More than 30 countries were represented a the gala.