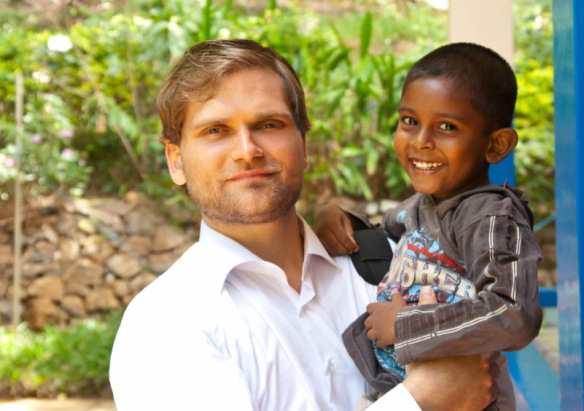 For more than three years now the Diplomatic Council, with the help of its dedicated members, has been supporting Little Smile, a children’s aid project based in Sri Lanka. Michael Kreitmeir, a television journalist, whose son Manual Kreitmeir is a long-time member of the Diplomatic Council, visited Sri Lanka in his function as a journalist more than 20 years ago and witnessed the misery of orphanage children which was a result of the Sri Lankan Civil War. Kreitmeir was so distressed by these children’s fates that he started, with the encouragement of our Sri Lankan Founding President, Ambassador Buddhi Athauda, to build the children’s village Magagedara in the mountain of Sri Lanka mainly with his own money.

Ever since the project has grown, against all odds such as the Tsumani that has again tormented the country in 2004. Today, the village is home to six children’s homes, a farm building, a school, a training workshop, sewing workshop, carpenter’s workshop, a Buddhist and Hindu temple, a chapel, two homes for widows with children, a guest house and a dwelling house for the employees, a hospital ward, a meeting house and large plantations for pepper, vanilla and cinnamon as well as rice and vegetables for self-supply.

The Diplomatic Council is proud to be able to support Little Smile whereby we focus on offer educational sponsorships to the orphans. We provide funds to finance either a vocational training or a study of a child. With an amount of € 2.500 the orphan is able complete a vocational training or a study depending on its skills. The first sponsor was Diplomatic Council Business Ambassador Dr. Thomas Durchlaub, followed by Annette Habermann, who sponsored the second child. This year’s patrons are Diplomatic Council Finance Director Dirk Nauman as well Business Ambassador Jamal Qaiser and Business Ambassador Dr. Thomas Durchlaub who share the funds for the fourth child. Helping children to receive education is providing a promising future to them with the hope that they will give back to their society and in return help others.

At the upcoming Gala on February 7 we will say thank you to our sponsors!