We have to overcome the crisis of multilateralism 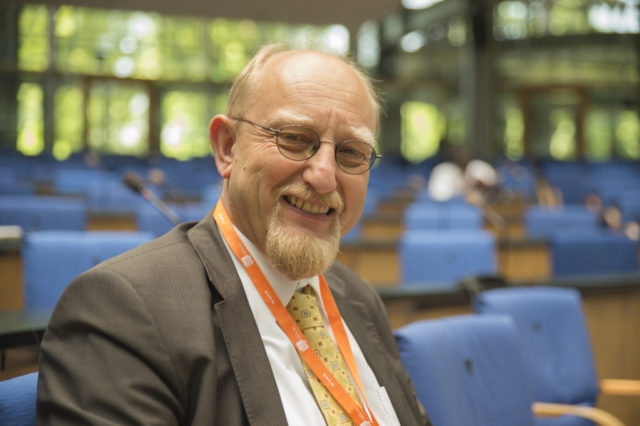 We have to overcome the crisis of multilateralism

By H.E. Dr. Heinrich Kreft, Ambassador of Germany to Luxembourg and President of the Diplomatic Council.

Europe has proved to the world that multilateralism and sovereignty are not a contradiction in terms. On the contrary, in a world faced with immense global problems, we can only safeguard sovereignty if we work together! The three words, “we the peoples”, express both our goal and how we will achieve it.

After all, we Germans in particular, can have no interest in a “jungle growing back in the world order”. But it is true: Nothing can be taken for granted any more in foreign policy. The future is open and it can be shaped. But it also poses unknown risks.

This dichotomy challenges us each and every day.So what is the big issue in 2019? Syria? North Korea? The Middle East? Or the dramatic global refugee situation from the Mediterranean to Venezuela?

If you take a step back, these conflicts reveal a bigger picture and a distinct pattern. It becomes clear that we are indeed faced with a crisis – the crisis of multilateralism. And this crisis makes conflicts around the world appear irresolvable.

When I say they “appear” irresolvable, this reflects the faith we Germans have in multilateralism. Germany’s postwar success story is also multilateralism’s success story. Europe, which was scarred by war and destruction, was able to integrate in freedom, security and prosperity thanks to our European neighbors’ courage in seeking reconciliation.

The fact that it was this Europe that was able to become the United Nations’ closest partner is a triumph of multilateralism. We believe in the United Nations because international cooperation changed our own fate for the better.

Europe has proved to the world that multilateralism and sovereignty are not a contradiction in terms. On the contrary, in a world faced with immense global problems, we can only safeguard sovereignty if we work together! The three words, “we the peoples”, express both our goal and how we will achieve it.

That’s why the founders of the United Nations put these words at the start of the Charter. They wanted to spell out that we need to work together to find solutions. The UN-Charter’s promises are addressed to the people, who are told that their freedom and dignity will be defended at the United Nations in New York.

But does a boy in Idlib or Sanaa who lives in constant fear of the next air strike feel this? How does a girl in Africa feel when her life expectancy at birth is 30 years lower than in Germany? If we do not act on their behalf, “we the peoples” will simply be hollow words for them.

Kofi Annan once said: “We don’t need any more promises. We need to start keeping the promises we already made.” Since  Germany joined the Security Council as a non-permanent member a few weeks’ ago, this is our vision that motivates us.

The crisis of multilateralism is most painfully evident in Syria. The civil war has long since turned into a widespread regional conflict, with further potential for escalation in an already ravaged region. This sort of war cannot be resolved by military means, as the regional players are too deeply involved and the individual stakes are too high. With united diplomatic efforts, we did, however, manage to prevent escalation in Idlib. But ultimately, and at long last, we need a political process. To this end, the talks must be held under the auspices of the United Nations.

The conflict in Ukraine will also continue to occupy us. Along with France, Russia and Ukraine, we are working hard to implement the Minsk agreements. The focus is on the measures agreed a long time ago with a view to stabilizing the ceasefire. All efforts, including our discussion on a possible UN mission in eastern Ukraine, are aimed at achieving that.

Let us not forget that acute crisis management is at best a step towards peace. Lasting peace can only be achieved if we put a stop to the arms race.

This is not some sort of nostalgic rhetoric from the days of the Cold War, whose balance of terror seems utterly benign compared with the scenario of a “multipolar” arms race, with far more unpredictable players.Germany and the European Union stand by the Paris Climate Agreement. Moreover, we want to ensure that the Security Council makes the devastating effects that climate change can have on the security and stability of entire countries and regions an even greater priority.

A couple of weeks ago, I hosted a lunch in Luxembourg with Prof. Schellnhuber and the Luxembourg  Ministers of the Environment and Energy. Schellnhuber is what some call Germany`s  Climate pope. He is an advisor to Angela Merkel, the EU Commission and the UN. He has been warning of the consequences of global warming for decades.

Kofi Annan once said: “We will not enjoy development without security, or security without development. We will not enjoy either without universal respect for human rights.” Seventy years after the adoption of the Universal Declaration of Human Rights, its proclamation of dignity and personal freedom remains merely a distant promise for many.

Earlier, I spoke about how we Germans in particular have faith when it comes to multilateralism. This faith is also based on the fact that the United Nations, time and again and despite all disagreements, delivers proof of what we can achieve through joint efforts. I am thinking of the 2030 Agenda for Sustainable Development, which remains our guiding principle for making this a better world for all people.

We must resist the return of the jungle in international relations to the best of our ability. We have to overcome our problems in Europe. It will not be easy. There are many. From Brexit to the rise of anti-European populists. We need to build a stronger and more united Europe.

A united Europe is our answer to “America First, China First, Russia First, Everybody First.

A democratic and united Europa is our answer to growing nationalism and trade wars and the undermining of the rules –based international order which has served us so well in the past.

Allow me to end with appealing to all of you who are EU citizens and will be able to vote at the European Elections the end of May. Go voting and vote for a pro-European party!